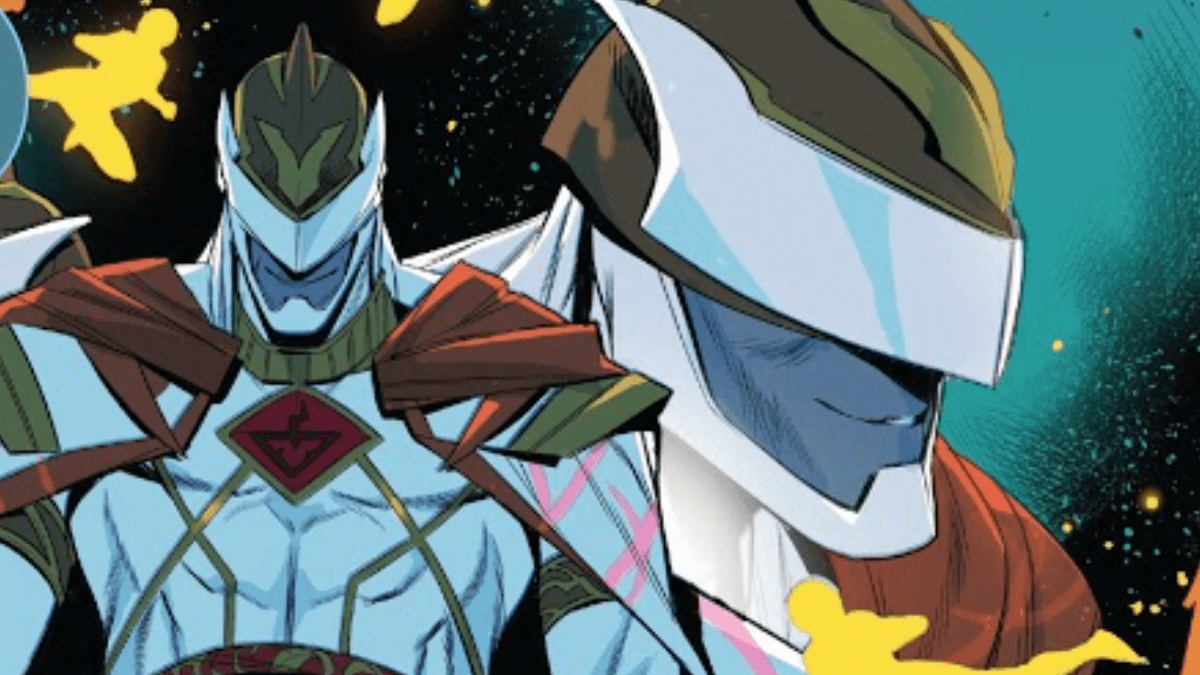 The premiere of Power Rangers Dino Fury was rolling along at an even pace. Characters were being introduced, backstory was set up, and we got a cool fight! Then everything slowed down and Zayto let us in the backstory of the Dino Fury powers. That exposition dump sent Power Rangers fans minds ABLAZE. So much lore! An unheard of team of Rangers? They were given powers by… THE MORPHIN MASTERS?

If you aren’t knee deep in Power Rangers lore you might be left scratching your head. Who are the Morphin Masters? (Or is it Morphing Masters?) Why are they such a big deal? Are they new to Dino Fury? They seem pretty important! Well they are… but for a long time they weren’t.

You see, the Morphin Masters were introduced WAYYYYY back in the seventh episode of Mighty Morphin Power Rangers, ‘Big Sisters.’  The plot was fairly standard early Power Rangers. The team had to save a kid, giant zord fight, weird use of Japanese footage, etc. The most notable part of the episode was Rita wanting to use that kid to unlock a chest with two “Power Eggs” inside. When relating why the Power Eggs were so important Zordon explained,

“Millions of years ago ancient sorcerers who called themselves the Morphing Masters hid a universe of power within two mystic Power Eggs. By casting the eggs into the sea the sorcerers believed that their ancient ancestors would look down on the eggs and protect them from universal danger.”

As Zordon described this we saw some blurry footage of people in what appeared to ceremonial outfits tossing the eggs into the ocean. This was stock footage from Zyuranger, the show MMPR took its footage from, but the Power Rangers producers repurposed it to give a backstory to the Power Eggs.

Sounds like a pretty big deal right? Power Rangers morph every episode, so the Morphing Masters should be a key piece of the lore. Well… it wasn’t. This was a tossed off reference from the earliest days of the show when shooting the show fast and cheap was more important than building a cohesive universe. While early elements like the Morphin’ Grid eventually got expanded on, the Morphing Masters were left as a curious relic of the show’s earliest days.

Except fans never forget something with a name like Morphing Masters. Slowly evolving over the years to be called the MORPHIN masters (why did we lose the g? Cause Mighty MORPHIN?) the concept was always in background of discussions amongst hardcore fans. Who were they? What place could they have in the universe? They MUST be important, right? It was a key point in fanon for a long time.

But that’s all it was for over twenty years… until the Boom Power Rangers comics. Now keep in mind the comics are in their own universe (and we discussed their relation to Dino Fury and if they’re in the “Prime” universe or comic universe at length here) but it’s still relevant.

Rising to prominence during the Shattered Grid storyline, the Morphin Masters (guess the fan name stuck) were portrayed as beings outside the universe, ones who “set the worlds in motion.” They had emissaries to speak with mere mortals and weren’t all that concerned with involving themselves “in the affairs of man.”

Still, they loomed large over the comics and we finally got to see a Morphin Master in the Beyond the Grid storyline, Praetor. The Masters true nature was still kept vague but we got a few more details. They assumed they were the first ones to discover the Morphin Grid and devoted themselves to, “studying its unique singular nature.” Since then we’ve gotten more information , including the revelation that the Masters entire civilization ascended into the Morphin Grid! This, in a roundabout way, minorly addresses those “ancient ancestors” that were mentioned in their original appearance.

But if these Morphin Masters aren’t the same as the TV show’s Morphing Masters what does it matter? Well even if they aren’t in the same universe, the LOOK of the Morphin Masters seen in Dino Fury is clearly based on the comic versions. They aren’t exact replications but they’re pretty damn close. The biggest differences are the color of the suits, the mouth, and eyes.

What we learned about them in the Dino Fury premiere is, according to Zayto, they’re “ageless beings with untold power.”  We see them appear out of a portal and use the Morphin Grid to bond Zayto and the other knights with the spirits of dinosaurs to create the Dino Fury Power Rangers.

None of this contradicts anything we saw in MMPR (ageless beings could have ancestors to!) so it delightfully expands on what little we got back then and finally establishes the Masters as critically important to the Power Rangers universe. They have power over the Grid and can create Ranger teams seemingly whenever they want! If that doesn’t open up universes of possibilities, I don’t know what does.

It’s incredible to see what were once throw away characters meant to explain away some Zyuranger stock footage finally become what fans always assumed they were, integral to the fabric of the Power Rangers TV universe. Hopefully we’ll see more of them as Dino Fury goes on!