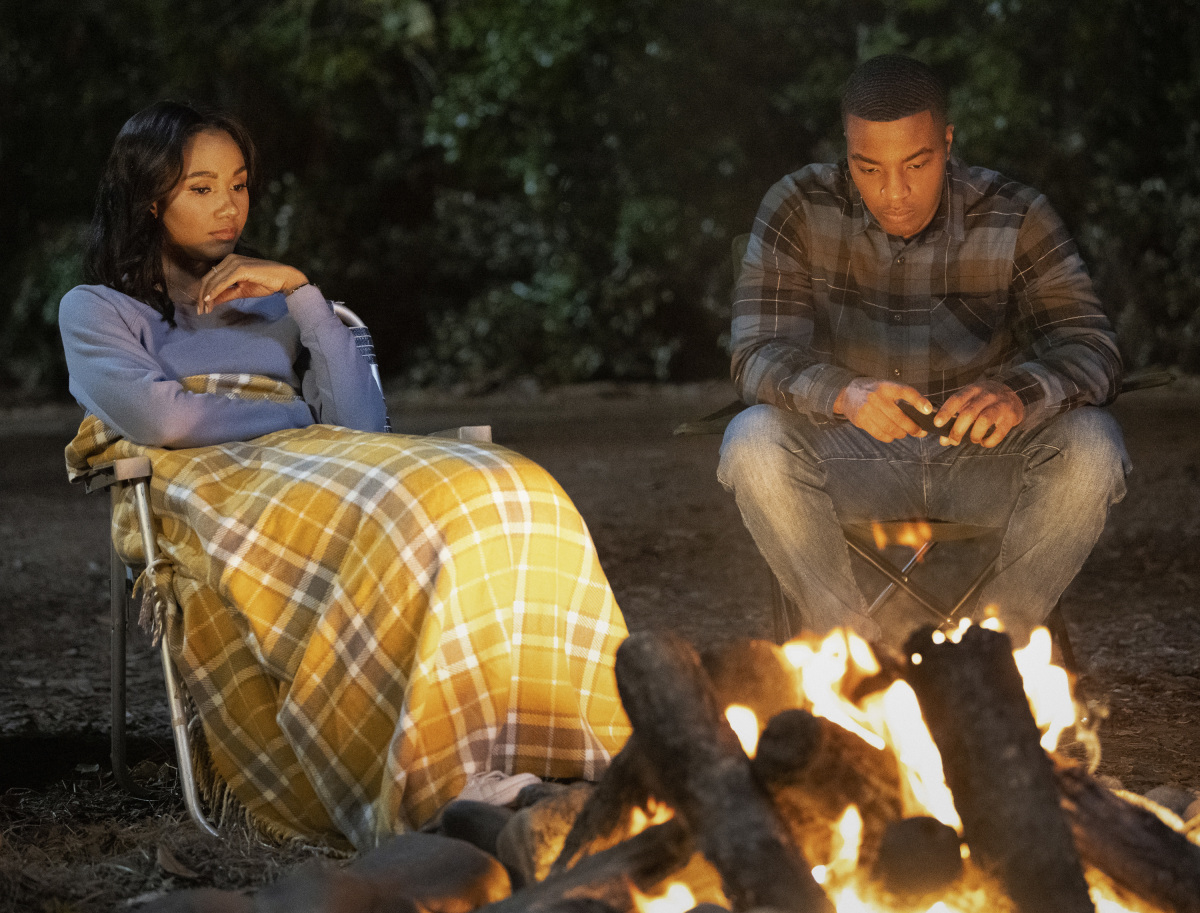 This All American review contains spoilers.

The cabin. Oh, that cabin. I didn’t think I’d have to go through the same level of emotional gutting as “Coming Home”, when Corey (Chad L. Coleman) died, but that cold open really gave the Season 2 installment a run for its money. The cinematography and the music choice of the first couple of minutes of “Teenage Love” got to me. What a moving way to open the episode. Overall, “Teenage Love,” gave us time to see teens being teens, with all their drama and secrets—if there weren’t any, it wouldn’t really be a teen sports drama, would it?

The truth comes out, one way or another.

“Teenage Love” does a great job of bringing some long-neglected issues to light as tensions rise between the teenagers. That “Never Have I Ever” game went south pretty fast—game over in the messiest way. What was also notable in this episode is the series has its teens being teens. Sometimes, teen dramas forget to allow their characters to be teenagers and have teenager issues. But what makes it a good episode is how we get the chance to see everyone’s issues come to light. We had some mature conversations and those conversations had to happen because most of the feelings were all bottled up.

The tension between Asher (Cody Christian), Vanessa (Alondra Delgado), and Olivia (Samantha Logan) had to be exposed at some point and Olivia nor Vanessa made any effort to shy away from it. Asher and Olivia parting ways was the best decision. The chemistry is just not there anymore. It barely ever was. After they had their fight towards the end, we know that they just grew apart. And that’s okay because Spencer (Daniel Ezra) and Olivia are endgame.

In this episode, Asher has the audacity to call Olivia out for being close with Spencer and always wanting to help him out, like he wasn’t clearly having an emotional affair with Vanessa this whole time. His body language and demeanor changes around her and you can sense the jealousy coming from him from time to time. He wants her but can’t find it in him to be upfront with Olivia about it… until their fight. I haven’t been too keen on Asher lately, especially because he’s been slowly regressing on all of that character development he had last season. But the way he finally gave in and told Olivia how he felt, and in the way that she’s always wanted to save the people around her, I’ll give him a pat on the back for that. Like I said, they’ve outgrown each other.

Speaking of the saving part… you know who else can’t seem to stop doing that? Spencer. Spencer and Olivia are perfect together in so many ways and I know I babble about them too much, but one of the reasons is that they need to be the ones that can save the people they care and love, no matter what it takes. Because it’s in them and that’s how they are, which makes them such a great fit together. Not only do they get each other, but they do their best to improve the wellbeing of everyone around them. Even if it gets to be too much at times.

Viewers witness the ins and outs of romantic relationships on TV so often, we tend to already know what to expect when a break-up is underway. But you know what we don’t see as often? Friendships and everything that can go into that relationship. Friendship is just as important, it’s just as sensitive, and, at times, it’s just as hurtful as romantic relationship—sometimes even more. Just like as All American makes space for conversations about the mental turmoil that can come with competitive sports, the series makes space for conversations that need to be had about the falling out of friendships. We get a parallel fight sequence between Asher/Olivia and Spencer and Coop (Bre-Z) and it’s hurtful to watch, but it’s realistic and I’m glad it gets its own screen time, and that all parties get the the opportunity to say their peace.

Will Coop and Spencer make up so quickly, after being best friends for all these years? Or will this fall out last longer than it should? Time will only tell. I didn’t, however, think it was okay that Coop started to gaslight Spencer for being the one to always want to save her from her sticky situations. That was cold.

Simone makes a good point with Jordan when she says he wasn’t really the real Simone outside of her pregnancy and having that conversation about wanting to make it work was mature of them. She was right, but it seems Jordan really loves her enough to not want to give up on their fresh relationship.

Yes, Layla. What really happened in Vegas?! We wanna know, too.

Billy and Laura being all cool with each other and throwing it back to their good old days was nice to watch. They’re making this co-parenting/being friends after splitting up look easy and tolerable.

Corey’s letters to Spencer were pretty harsh but it came from all the built up experiences he’s been through.

Fettuccine a la JJ? Man, that sounds like a stomachache waiting to happen.