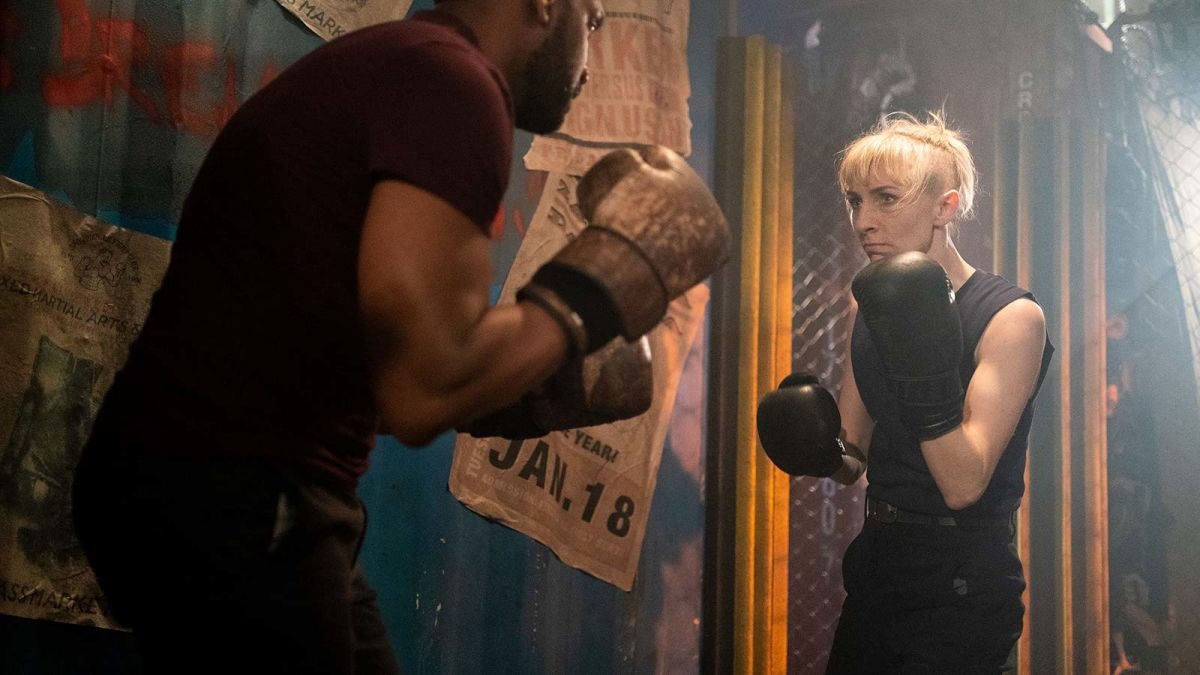 The introduction of Icy Bob was a bit concerning. Snowpiercer is as much as hard sci-fi show as anything, with most of the luxury of First Class balanced out by the hard work of Second and Third Class passengers who keep the lights on and put food on the table. We have seen them composting, carefully guarding their vegetables, using everything possible, and wasting little or nothing as they try to keep everyone fed and watered. The struggle has been evident on the faces, particularly among the people of the Tail. Everyone has enough, albeit barely, and the black market economy is as much about extra food as it is about weed and books.

And then, there’s a giant monster who is apparently immune to the cold.

It’s not the ideal, or expected, introduction, but all of that is forgiven from the first moment Icy Bob (Andre Tricoteau) actually opens his mouth to speak to Josie (Katie McGuinness) as she fights off the rising waves of a panic attack courtesy of the Headwoods (Sakina Jaffrey and Damian Young) and their poor bedside manner. He’s calm, quiet, and unassuming, in spite of his massive size and scary appearance, and to have him be a quiet, reasonable person with good tips for dealing with the pain caused by multiple debridement treatments is reassuring. Sure, he might look like a monster, but at his core, he’s clearly a reasonable, nice enough human being who is currently dealing with some very serious medical issues.

It’s the classic literature trope; what’s Icy Bob if not just Headwood’s Monster? But in an episode full of unexpected body horror inflicted on Josie by the mad scientists, relishing the opportunity to test “the goo” on someone so badly injured, it’s a surprising, almost touching moment that comes out of nowhere. He’s not loquacious, but Tiffany Ezuma’s script handles that character better than he has any right to be handled. While his initial appearance might have been a bit concerning as far as the direction of the show, his first appearance as something other than a weapon or a screaming, tormented slime monster puts to rest my doubts about the character’s place in the narrative.

Icy Bob is nothing more than just a pawn on Wilford’s chessboard, just like everyone else. Rather than being oblivious, he’s accepting of this fate. He’s Wilford’s cavalry charge, he’s the Headwoods’ experiment, and he’s strangely okay with that. He’s a creature who routinely feels incredible physical pain, and is able to get past it and though it without losing his innate humanity. He’s a solid book-end with Till (Mickey Sumner), who goes through her own mental and emotional pain and deals with it by shutting down, rather than working through it, until Pastor Logan (Bryan Terrell Clark) dishes out a little tough love and a few solid body shots in an ersatz boxing ring. The message is clear, pain isn’t everything, it’s just a part of life that everyone has to deal with. Some people just get more pain allotted to them than others.

And some people have pain thrust upon them by others. Layton is struggling with the burden of leadership and is shutting out anyone he doesn’t trust implicitly. Ruth is struggling with feeling cut off from the decisions made by the secretive Layton. Till is struggling with her role as train detective. Pike is struggling because of Layton needing him to do some dirty work. Even the engineering staff are struggling as Melanie has failed to connect to their latest balloon launch, putting their work in jeopardy. In short, nobody is happy, not even the pining Mr. Wilford.

Misery is always good for an actor. Mickey Sumner is solid as always. Daveed Diggs, when given that brief moment of light with Zarah looking at their child’s ultrasound, puts so much emotion and happiness into it that the rest of his muted performance is able to put across the idea of the weight of the mantle of leadership. Andre Tricoteau saves the character of Icy Bob the first time he opens his mouth. Sean Bean and Lena Hall do a wonderful job in their shared scenes together as a pair drawn together once more by fate and necessity.

However, all that pales in comparison to the brilliant work of the underutilized Steven Ogg. Leslie Hope puts Pike through the full gamut of emotions this week, from smug and preening to angry and wounded, then shedding bitter tears because of being put into a position that he never wanted to be in due to owing his life to another man. I’ve never been a mark for the “shaving my head because my mind is falling apart” gimmick that shows up periodically in media, but Ogg’s heartbroken, grief-stricken performance (and Shaun Toub’s horrifying death scene, fair dues to him) make it work. Pike’s big talk and bossy swagger has always been a front for something, but that façade rips away to great effect.

Like Icy Bob, a thing I wasn’t sure about turned out to work well, all the same, because the actor involved nailed it perfectly, and unlike the train itself, Snowpiercer the show seems to be running on smooth track even as Wilford’s influence continues to further destabilize the chaotic social structure of humanity’s last hope for survival. He might win his train back, but lose everything else as a result. No doubt, to him, it’d still be worth it as long as he keeps Audrey at his side.