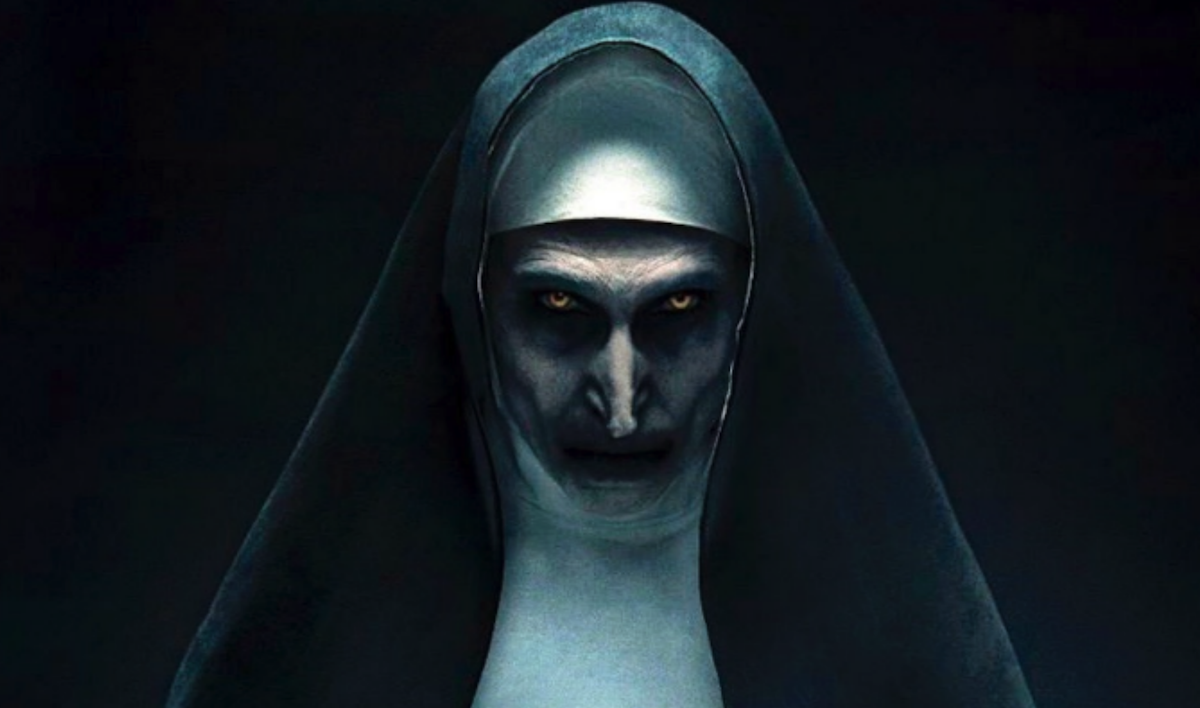 The Conjuring 2 depicts the demon Valak as some horrific rendition of Cheech and Chong’s Sister Mary Elephant. But this Grand President of Hell is more cherub than dragon in the demonic hierarchy.

As the 62nd spirit in a 72-demon roster, Valak is no delinquent, although he’s been blamed for the two 1212 Children’s Crusades to the Holy Land, which resulted in thousands of teenagers from Germany and France being sold into slavery. Valak also retroactively gets the rap for the 1284 Pied Piper missing children incident in the German village of Hamelin.

The majority of what we know about Valak comes from the mid-17th century Goetic grimoire The Lesser Key of Solomon, a compilation of centuries’ worth of texts. Samuel Liddell MacGregor Mathers translated the works for the Hermetic Order of the Golden Dawn, a late 18th-century magical order. They were published by the notorious English occultist Aleister Crowley as The Book of the Goetia of Solomon the King in the 20th century. Crowley added invocations, along with essays describing the rituals as psychological exploration. According to legend, the demons featured in the grimoire were the ones summoned by the King Solomon character in the Bible.

“The Sixty-second Spirit is Volac, or Valak, or Valu,” reads The Lesser Key of Solomon. “He is a President Mighty and Great, and appeareth like a Child with Angel’s Wings, riding on a Two-headed Dragon. His Office is to give True Answers of Hidden Treasures, and to tell where Serpents may be seen. The which he will bring unto the Exorciser without any Force or Strength being by him employed. He governeth 38 Legions of Spirits.”

Valak first appeared in written form in Pseudomonarchia Daemonum (The False Monarchy of Demons”). The text was an appendix in the 1577 grimoire De praestigiis daemonum (“On the Tricks of Demons”), by Johann Weyer, who himself was a Dutch physician, renowned occultist, and demonologist. That book listed 69 demons along with the proscribed rituals to conjure them.  The 72 Shemhamphorasch angelic names and seals came from the 1583 manuscript Le Livre des Esperitz (“The Office of Spirits”) by Blaise de Vigenère, and a now-lost work by Johannes Trithemius.

Valak has several names and titles, depending on the manuscripts and the translation. The spellings of the demon’s moniker range from Ualac to Valu, and Doolas to Volach in Munich Manual of Demonic Magic. A 1577 grimoire called the Book of Oberon lists a demon named Coolor, which is believed to be another name for Valak. This informed Reginald Scott’s influential 1584 grimoire, The Discoverie of Witchcraft.

Valak’s ranking is mainly listed as a “president,” but some manuscripts ranked him as a prince. Don’t let the titles fool you, every demon is called a duke, a king, or a prince. As a Lesser Key demon, Valak leads 38 legions of demons, though the number is also put at 30 and 27 legions of spirits, depending on the manuscript.

The classical iconography of Valak is based on the ancient Greek deity Hermes, whose counterpart in the Roman Mythology was Mercury. Hermes is often depicted as wielding a staff called the caduceus, which is made up of two entwined serpents. The grimoires repurpose that into the two-headed dragon. The two-headed Dragon also has Hindu connotations because it symbolically refers to the arousal of Kundalini, represented by the fire snake. This is believed to be the origin of Valak’s association with snakes.

Humans have six categories for demons, according to Weyer’s Pseudomonarchia Daemonum: Empyreal, Aerial, Subterranean, Aqueous, Terrene, and Lucifugi, which means nocturnal. Angels reportedly recognize only two categories: Apokomistai, which are older, and Nekudaimones, which are younger and weaker. In order to take human form, a Nekudaimone has to possess a human or animal. An Apokomistai can take any form. Valak is an Apokomistai. When summoned, he reputedly appears as a child who uses innocence to lure victims to bad ends. This reputation led to the association with the Children’s Crusades, and the 130 children of Hamlin who went missing on June 26, 1248, even though there were no reports of demons at the time.

Investigators also found no demonic activity at the heart of the events behind The Conjuring 2. Instead they blamed the Enfield Poltergeist, according to the book This House is Haunted by Guy Lyon Playfair. The famous paranormal experts Ed and Lorraine Warren showed up unannounced in the British countryside and were dismissed from the property. They were there for a matter of minutes. That wasn’t the only disparity.

Valak is a male Demon and does not manifest in any female form. In full evocation, he anecdotally appears as a very pale man with black hair and dark eyes. There is no lore that has ever portrayed Valak as a nun. Director James Wan got the Nun character from a vision Lorraine Warren, played by Vera Farmiga in The Conjuring films, claimed she saw of a hooded entity in a swirling tornado vortex. Wan initially loved the CGI possibilities, but ultimately scaled it down to holy iconography. The Nun wasn’t even added to The Conjuring 2 until reshoots, Wan told Gizmodo. The Nun is played by Bonnie Aarons, who also donned the habit in Annabelle: Creation.

In The Conjuring 2, the Nun seems to be stalking Lorraine Warren. Not only does she see the Nun at the Amityville house, and in Enfield, England, but the demon also appeared at the Warren’s home before the investigations. While some viewers may see this as foreshadowing, the character was also angling for a solo feature.

Unlike The Conjuring films, The Nun (2018) was not inspired by a true story but by the 1986 movie The Name of the Rose, based on the book of the same name by Italian author Umberto Eco. That film starred Sean Connery as Friar William of Baskerville. Christian Slater played his apprentice. They investigate the mysterious death of a famous monk who lived in Benedictine abbey in Northern Italy. The monk was found dead in a vat of pig blood and the villagers blame the Devil. Taking a cue from Van Halen, The Nun runs with it.

Valak is seen as something more than a possessive force. Possessions are rare, and often part of a bargaining process. Believers might call it “the fine print.”

Valak is a heavily petitioned demon. He is used for curse works like revenge but is also thought to help find money through random events. He is who you call on when you want a raise or promotion, an inheritance, or before financial negotiations. Valak doesn’t work for free, however, and “Demonic Magick” demands certain sacrifices. Luckily, Valak is partial to licorice, as well as gin, knives, coins, and public proclamations in his name. He does not respond to sexual offerings or blood. Summoning Solomonic spirits is traditionally done through ceremonial magic.

Old grimoires are written from a Christian point of view, and the rituals are invocations. In the Middle East, Valak is a Djinni, known to us in the west as genies. Like Aladdin! The djinn are supernatural creatures in early Arabian mythology and theology during the Pre-Islamic period. The djinn were not immortal but were feared because they brought disease and madness. The 72 spirits represent 72 psychological pathologies of the unconscious mind. Djinn are summoned through evocation, allowing the Djinn to be redeemed.

According to an adept practitioner we spoke with, who declined to be named, organized religions demonize Valak and other Lesser Demons, in part, because they “imparted wisdom via the use of astrology. Which is an excellent tool that has ancient roots in all of mankind. It enlightens and empowers people which is exactly what organized religion wants to suppress.”

But before you go rubbing any lamps with licorice sticks, the unnamed Goetic warns, “Wisdom is imparted, but not without a price. You have to really be empowered and very stable and sure of yourself if you want to work with them versus letting them control or overpower you. They do have a maleficent nature; however, without darkness light doesn’t exist either.”

The Conjuring 2’s Valak is a fun film creation. You don’t have to be Catholic to be scared of nuns. Cherubs, not so much. Even on a dragon with two heads, the image is far too accessible to convey what Wan needed. There are so many more horrid descriptions of angels and demons found in religious texts than Valak. But be assured, you never want to take candy from this baby.