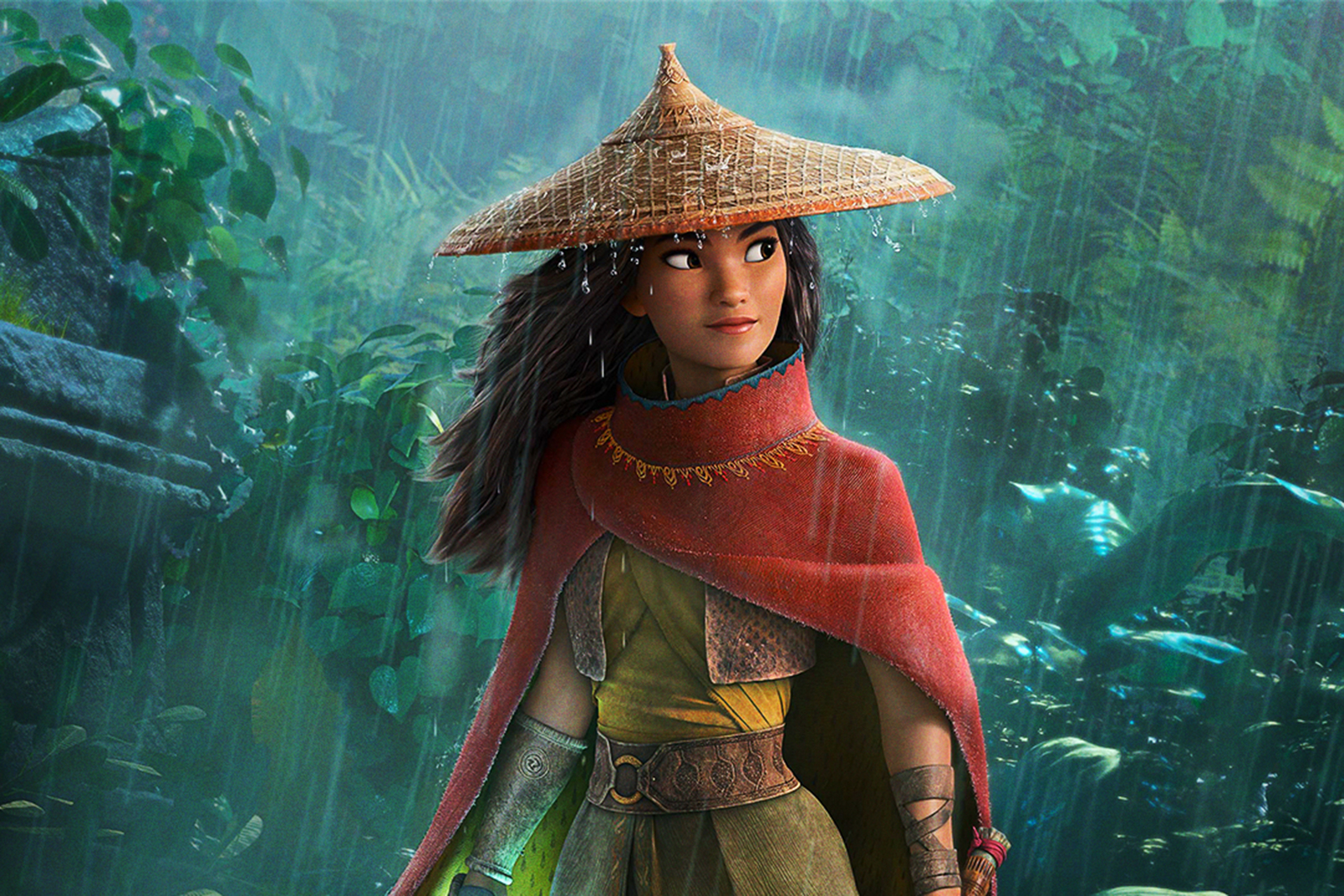 If Raya and the Last Dragon proves anything, it’s that Disney is trying to tell a more modern “Disney Princess” story with their latest animated effort. Commercially, Disney’s transition into the 21st century has been a smooth one. While the shuttering of Disney theme parks in the last year due to the pandemic has cost the billions-dollar conglomerate money, Disney has many, many revenue streams, and the Disney brand remains strong. And much of that brand still relies on the studio’s signature Disney Princess movies, which have not had as seamless a narrative transition into modern storytelling as many fans might have hoped.

Rigidly faithful live-action adaptations of the animated classics that millennials grew up with are now recognized for their narrow romantic messaging, and the often racist, colonialist world-building that’s used to prop up this type of storytelling. Meanwhile Walt Disney Animation Studios has attempted to complicate and modernize the Disney Princess template in interesting ways, but they’ve never quite nailed it narratively.

Frozen was a step in the right direction with its emphasis on sisterly love, but it couldn’t resist shoehorning a thematically superfluous romance into its plot with the Kristoff character. Moana, which features Disney’s first Polynesian heroine, makes great strides in giving viewers a more authentic representation of a non-European culture, but still makes some classic colonialist mistakes—blindspots that will always surface when the chief creative forces behind a film are appropriating a culture or cultures they are paid to understand—that keep its fresh setting from truly shining.

Disney is working to tell more modern stories not because it is good for our culture and world (though individuals involved in the production of Disney films might be motivated by this value), but because there is money to be made in telling new stories that give us fresh, feminist takes on the many cultures that influence the melting pot (or salad bowl) that is modern America and the territories of the larger global box office. Raya and the Last Dragon, which will be in theaters and available via Disney+ Premier Access on March 5, makes headway from both the thematic surplus of Frozen and the cultural appropriation of Moana. In doing so, it gives us the best, post-Renaissance “Disney Princess” story yet.

Raya lives in a fictional land once known as Kumandra, a place where humans and dragons co-existed in harmony. Five hundred years before the start of our story, monsters known as the Druun came to Kumandra, turning both people and dragons to stone. Dragons sacrificed themselves to save humanity, but fear and paranoia tore Kumandra apart into five distinct lands, each named after a different part of the dragon: Heart, Tail, Spine, Talon, and Fang. Raya lives in Heart, where her family has tasked itself with guarding the Dragon Gem, the MacGuffin that the last dragon used to save the world a half-millennia prior. When the Dragon Gem is broken and the Druun return, Raya sets out to find the mythical last dragon, Sisu, and to fix the world.

We are told that this story takes place long ago, but Raya’s vibrant world is already well-lived in when we come to it. The societies of Kumandra are different from both the European castles of Beauty and the Beast or Frozen, and the more rural aesthetic of Pocahontas or Moana. Pushing back against the false binary of the “civilized” city and the indigenous wilderness of other Disney Princess movies, the world of Raya is both urban and organic.

The filmmakers traveled throughout Southeast Asia to do research for the film, and it shows. Visually, Raya’s Heart homeland looks like Cambodia’s Angkor Wat, a vestige of the mighty Khmer empire. A trip to Talon reveals a merchant town seemingly in perpetual night market mode. It’s a Disney-fied version of the Banana Pancake Trail more than a specific cultural vision, but that doesn’t totally undercut the excitement the fresh Disney Princess setting infuses into its narrative.

The world of Raya and the Last Dragon is both teeming and accessible at the same time, suggestive of a richness and depth that welcomes rather than intimidates. It is more reminiscent of Avatar: The Last Airbender than anything Disney has done before.

To be clear, like Avatar before it, Raya and the Last Dragon is still very much an American story. While the setting may be a fictionalized world inspired by Southeast Asian cultures, Raya‘s premise is classic Hollywood: Raya suffers a familial tragedy and then must set out on her own quest to save the world. Raya brings that storytelling structure into the 21st century by eschewing the traditional trappings of romance or personal glory (which can be done in modern, interesting ways, but, given the redundancy of those stories needs to be worked harder toward), and leaning into themes of healing, forgiveness, and community. The biggest stakes here aren’t about securing a love or marriage—which, at least in Western media, has inextricable ties to the consolidation of privilege and power—but rather the (figurative) soul of humanity.

While Raya is, broadly speaking, a princess (her father Chief Benja is the leader of Kumandra’s Heart land), Raya’s quest to collect all of the pieces of the Dragon Gem is explicitly depicted to be about a fair redistribution of power and resources. The Druun are simple monsters, yes, but they are also effective stand-ins for the much more intangible forces that threaten our present and future: namely climate change and the devastating conflict that arises from the instability it creates. In Raya, our heroine’s mission is never about regaining or consolidating power. It’s about healing a community and, with it, the natural world—two necessary pieces of the same solution.

Raya and the Last Dragon has a diverse team behind its story. Written by Vietnamese-American playwright Qui Nguyen (Dispatches From Elsewhere, The Society) and Malaysian-born American Adele Lim (Crazy Rich Asians), the movie was co-directed by American filmmaker (and Moana co-director) Don Hall and by Mexican-American filmmaker Carlos López Estrada (Blindspotting). Thai artist Fawn Veerasunthorn served as the Head of Story for the film. It’s hard to imagine a predominantly white creative team telling this same story with anywhere close to the same success.

Lim (along with with co-writer Nguyen) brings the same character-driven humor she displayed in the Crazy Rich Asians script, giving Raya some laugh out loud funny moments for both kids and adults. Much of the American audience’s previous experience with Southeast Asian settings will no doubt be from the mostly masculine-coded aesthetic of action movie set-pieces or martial arts films that made their way to the United States. In Raya and the Last Dragon, we get both action set-pieces and martial arts showdowns… but they can also be pretty. That feels new.

The film has been criticized for its lack of Southeast Asian representation in its cast, which mostly features voice actors of East Asian descent. This kind of blanket, pan-regional representation is common in Hollywood, which tends to conflate communities of color based on a perceived shared distance to whiteness rather than any similarities their cultures may or may not have to one another. This is also true for Raya and the Last Dragon, which drew from the cultures of Cambodia, Laos, Thailand, Vietnam, Singapore, Indonesia, the Philippines, Myanmar, and Malaysia to tell its story. Southeast Asia has a population of over 670 million, which makes up more than 8.5 percent of the global population. It is a region with diverse and distinct cultures, and Raya and the Last Dragon‘s attempt to conflate them all into one world and call it fictional is problematic and will most likely undercut the emotional effectiveness of the story for some viewers.

While Raya‘s world may feel fresh and vibrant to many viewers, it’s the film’s character work that truly shines. The Disney Princess movie has not one, but three female characters at the heart of its film: Raya (Kelly Marie Tran), antagonist Namaari (Gemma Chan), and dragon Sisu (Awkwafina, with her signature blend of goofiness and heart). They all have complex relationships with themselves and one another, even when on different sides of the race for the Dragon Gem. The girl trifecta is rounded out by a solid supporting cast filled with subversive and fun character types that twist the plot and complicate the world in unexpected ways, including Raya’s adorable and visually clever pet pill bug companion Tuk Tuk (Alan Tudyk).

In a culture where more people than ever have a platform to voice their criticisms of mainstream stories, there is no such thing as a non-problematic fave. Raya and the Last Dragon will no doubt have its critics, and many of them will have valid criticisms. As viewers, we all have our narrative priorities—the aspects of storytelling that will pull us out of a story if done poorly, and the narrative elements that we prioritize so highly we will forgive a story its faults when done well.

For me, Raya and the Last Dragon is the most exciting Disney Princess story since Mulan. It gives us fiercely kind and incredibly flawed characters who care about healing a broken world and a setting that recognizes there is beauty and value outside of European castle towns. It’s not a perfect movie, but it’s something incredibly special that feels like a step forward for the Disney Princess canon.

Raya and the Last Dragon is available to watch on Disney+ beginning on March 5.

The Experiment That May Have Broken Physics | SciShow News
Link Tank: Win a Brand New Computer Case by be quiet!
Transforming circles into squares
The Effects of Longer Lifespans
There’s a Giant Hole in the Universe