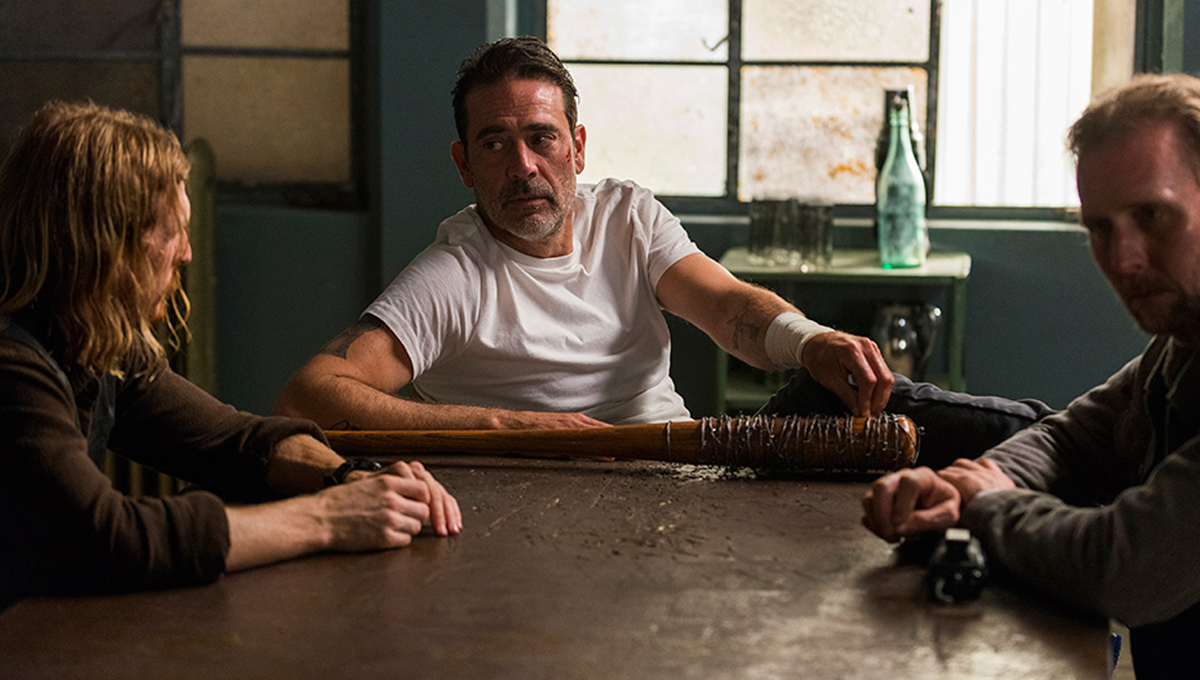 While the origin story of The Walking Dead’s antihero former big bad was effectively revealed in Season 10 finale “Here’s Negan,” it noticeably missed most of the comic book miniseries it adapts. Indeed, the episode may have showcased the arc of Jeffrey Dean Morgan’s Negan from philandering former Phys Ed teacher to post-apocalyptic barbed-wire-bat-swinging badass, but his arrival as a covetous cult leader was nowhere to be seen. However, that story might still manifest in the television universe… just not on the main show.

The Walking Dead showrunner Angela Kang essentially eliminated the notion of further Negan flashbacks on the franchise’s imminently ending mothership. In an interview with EW, Kang acknowledges the major alterations and omissions in “Here’s Negan,” notably how it missed the majority of Robert Kirkman’s 16-issue 2016 miniseries of the same name, in which the titular traumatized widower forms the antagonistic survivor group called The Saviors. Indeed, while the episode aptly adapted Negan’s relationship with dying wife Lucille (played by Morgan’s real-life wife, Hilarie Burton), that story’s necessary dominance gave way to a distilled, incomplete recount of how her death transformed him.

“Yeah, there’s a ton of story in terms of what happens between this and his very first murder monologue, and when our characters cross him,” explains Kang on missing the Saviors origin. “So, I really hope that that is a story that is told at some point, but it will probably not be on The Walking Dead mothership series.”

Of course, Kang is hardly telling tales out of school when she strongly implies that the rest of the “Here’s Negan” origin tale will not play out on The Walking Dead. After all, the 24 episodes allocated for the show’s final season—while exceptionally hefty—will clearly be dominated by a sizable main storyline, adapting the final arc of Kirkman’s main comic, which centers on our survivors’ already-commenced conflict with authoritarian nation-state The Commonwealth. Moreover, as the episode’s final moments imply with a post-reflection Negan’s smirk-strewn return to Alexandria, the character’s Season 11 arc—certain to be showcased only sporadically amidst the Commonwealth story—will center on his fraught relationship with Maggie—and, by proxy, her young son, Herschel. After all, the horrendous head-bashing crime that served as his introduction back in the Season 6-7 cliffhanger, the murder of husband Glenn, remains prominently consequential to the series.

However, Kang’s expressed hope for the Saviors’ origin tale to manifest in The Walking Dead television universe has an obvious would-be platform, the announced anthology series, Tales of the Walking Dead, which, per chief content officer Scott M. Gimple’s statement this past September, will showcase “brand new stories and characters, familiar faces and places, new voices, and new mythologies.” At that time, a television adaptation of the “Here’s Negan” story seemed like a prime candidate for Tales to tackle, but AMC’s decision to boost the pandemic-pushed conclusion of Season 10 with the recently-aired sextet of social-distancing-adherent “bonus episodes” necessitated more immediate mining of that comic material. Thus, with most of Negan’s post-widower, pre-All-Out-War odyssey in the undead world not yet covered, “Here’s Negan” remains a prime source of prospective material for the developing anthology offering.

Pertinently, one of the more notable alterations to the “Here’s Negan” episode saw Negan’s initial meeting of eventual Saviors members Dwight (Austin Amelio) and wife Sherry (Christina Evangelista) nixed in lieu of meeting—and eventually rescuing—another future Savior (and eventual Alexandria resident), Laura (Lindsley Register), who is depicted here as a young, philanthropic survivor alongside her father, Franklin (Miles Mussenden). While comic-savvy fans were left curious about the choice to swap Dwight and Sherry for Laura and Franklin, Kang reveals that it wasn’t artistically motivated. Rather, it was the result of the pandemic’s affect on the shooting schedule of spinoff Fear the Walking Dead, on which Austin Amelio’s Dwight is now part of the main cast.

“The scheduling did not work with Fear the Walking Dead because usually we’re not on the exact same filming schedule,” says Kang. “But because COVID pushed everything, it wouldn’t have worked to bring [Amelio] over.” Indeed, Kang laments the comic divergence, stating, “We wanted to bring back somebody that was a former Savior. And this is no knock against our Laura, we love that actor and she’s wonderful, and it worked out great. But our original desire was to get Dwight because obviously Dwight is who appears in the Here’s Negan comic.”

Of course, in 2019, Amelio’s Dwight became the second mothership character—after Lennie James’s Morgan—to migrate over to Fear, and remains a regular as the series resumes its sixth season later this month. Yet, as the grip of the pandemic slowly loosens amidst widespread vaccinations, the idea of Amelio (and Evangelista) being available to shoot for Tales of the Walking Dead looks increasingly feasible. Thusly, the rest of “Here’s Negan” can still play out properly, with a tough-but-jaded Negan (who’ll presumably cross paths with Laura again), meeting up with a core group of survivors initially led by Dwight, who he usurps using charisma and undeniable confidence, taking them all down the dark, totalitarian path we eventually saw on the main series.

There are still important checkpoints to reach before the Saviors story presumably gets told, since the Commonwealth-dominated eleventh and final season of The Walking Dead is scheduled to premiere on AMC on Sunday, August 22. In the meantime, those who might have been disappointed by the lack of Dwight in “Here’s Negan” can get their fill of the character when spinoff Fear the Walking Dead premieres the second half of its sixth season on AMC on Sunday, April 11.