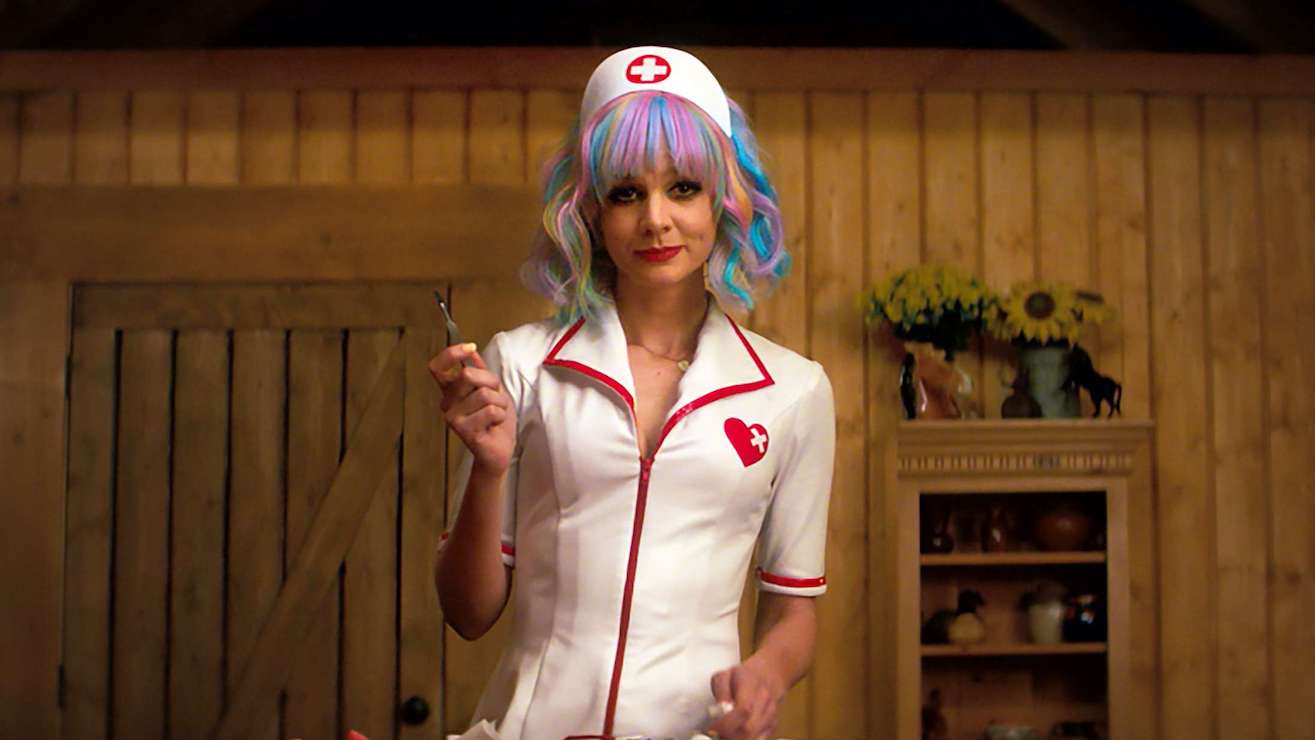 Cinema is full of stories of righteously angry women who have suffered at the hands of wicked men. Invariably, these stories also see those women reclaim power over their own narratives by brutally punishing the men responsible. In Quentin Tarantino’s Kill Bill, The Bride stands triumphant, holding a katana over the mangled bodies of those who have tried to do her harm. Jennifer Cheek makes the boys of Jennifer’s Body pay for their misogynist behavior with their own blood, literally feasting on their souls. Revenge socialite Jen reinvents herself as a gory action hero as she literally hunts down the men who violated her.

There are power poses and triumphant musical chords, all acknowledging that justice has, in fact, been served, and that bad men have been disciplined—that a heroine has claimed her power and set the world to rights again. Usually, there’s also no small amount of death and blood along the way. (See also: All three movies mentioned above.)

Initially, it seems as though this is precisely the sort of film that Emerald Fennell’s Promising Young Woman intends to be. Its marketing strategy leans into the idea that Cassie Thomas is a sort of avenging angel in provocative dress, a candy-colored vision who tempts terrible men to their own well-deserved destruction, all set to the sound of a banging orchestral cover of Britney Spears’ “Toxic” in the trailer. But then, too often, that’s what audiences want: an easy solution to a complicated problem, wrapped in some brightly packaged Hollywoodized reassurance that there are, in fact, some sort of consequences for those who do harm to women.

But this isn’t that film, and Promising Young Woman doesn’t particularly care if that fact makes viewers uncomfortable. Instead this is a movie that pushes us to directly confront the harsh, deeply uncomfortable reality of such a situation rather than revel in the entertaining but empty catharsis of a blood-soaked fantasy romp. And that’s precisely what makes Promising Young Woman so incredible—and so difficult—to watch.

This is a feminist revenge movie that lives in the world as we know it today. Here, there is no final reckoning, no bloody triumph, no movie poster-ready stance from a woman who can, finally, put down the emotional burden she’s been carrying, and find the justice she’s been seeking. There’s no real sense that anything that Cassie’s done has made much of a difference at all, and though she does eventually manage to punish her best friend’s rapist, this one single clear victory comes at the cost of her own life.

Throughout its runtime, Promising Young Woman revels in bringing a particularly harsh and ugly truth to light: There’s only so much female rage can do in a world that’s not only set-up to constantly make women fail, but which fails them so utterly in turn.

The basics of Cassie’s story should feel pretty familiar to fans of similar female revenge thrillers. A former medical student who dropped out when her best friend killed herself after being raped, Cassie spends her nights wearing an assortment of colorful disguises to local bars and pretending to be falling down drunk. When she lures a seemingly nice guy to her rescue, only to learn that he’s exactly the sort of creep willing to take advantage of a girl who isn’t aware enough to say no, her sly, fourth-wall-breaking smirk clues the audience in on what’s next.

But what actually comes next is likely not what any viewer expected. One of the first surprises of this film—which has many—is that Cassie’s modus operandi isn’t what you’ve been led to believe, and no men are actually harmed on her nightly sojourns. Instead she confronts them directly, using the shock of her sudden sobriety to shame and humiliate these supposedly good guys who think terms like rape, assault, or sexual coercion couldn’t possibly apply to their activities. There’s no explicit punishment, just a few vague threats and the momentarily mortifying exposure of their own hypocrisy.

Yet in truth, that’s all Cassie can do: force these men to experience a tiny piece of the shock and trauma that she, her best friend, and women everywhere have all been through, and hope it’s somehow enough to guilt them into maybe changing their ways next time. Maybe. Or not. There’s every chance these men, convinced of their own nice guy status, will simply write her off as crazy or delusional, an unfortunate mistake that happened while they were really just trying to do the right thing. Promising Young Woman is nothing if not honest about the ways that rape culture works overtime to validate men like this and to reassure them that their actions are always justifiable.

On some level, the truth behind the list of names in Cassie’s little black book feels disappointing. Though, really, it shouldn’t. Far too often in movies like this, female protagonists are asked, even expected, to react to trauma in the same way male ones would: With violence. (Think John Wick, Memento, or even Gladiator.) But in the real world, women rarely resort to such actions, largely because they’re too difficult, and would probably result in injury, death, or imprisonment. (See also: The end of Promising Young Woman.)

Even the idea that Cassie gets to sail through these shamings unscathed, that none of the men she fools get angry enough for things to turn physical requires more than a little suspension of disbelief. It’s why the achingly long scene of her death feels so realistic and so tragic. Because as much as we don’t want to believe it, female rage can only do so much, and revenge fantasies can only get you so far.

Even as Promising Young Woman allows Cassie to “win” in the end, it’s a pyrrhic victory that comes at the cost of her own life. (And after a lot of preplanning that indicated Cassie herself didn’t expect to survive her visit to see Nina’s rapist.) But the bitter truth is that this film’s ending is much closer to reality than something like Kill Bill or Revenge could ever be. And, as a result, Promising Young Woman is a movie about female rage that acknowledges how inadequate our ways of both discussing and responding to the anger that women feel actually are.

After all, revenge movies, at their core, are really stories about pain. It’s just pain that’s been wrapped up in blood and fury, packaged as something ferocious and terrifying so that no one looks too closely at the broken pieces underneath. But Promising Young Woman isn’t afraid to look at the truth that films like this normally paper over, no matter how brutal and depressing it may be.

It asks us to not only reckon with what we want out of revenge movies, specifically, but the differences in what men can get away with and what women must be willing to die to achieve. Technically, Cassie triumphed in the end here, didn’t she?  So why doesn’t it feel like a victory?