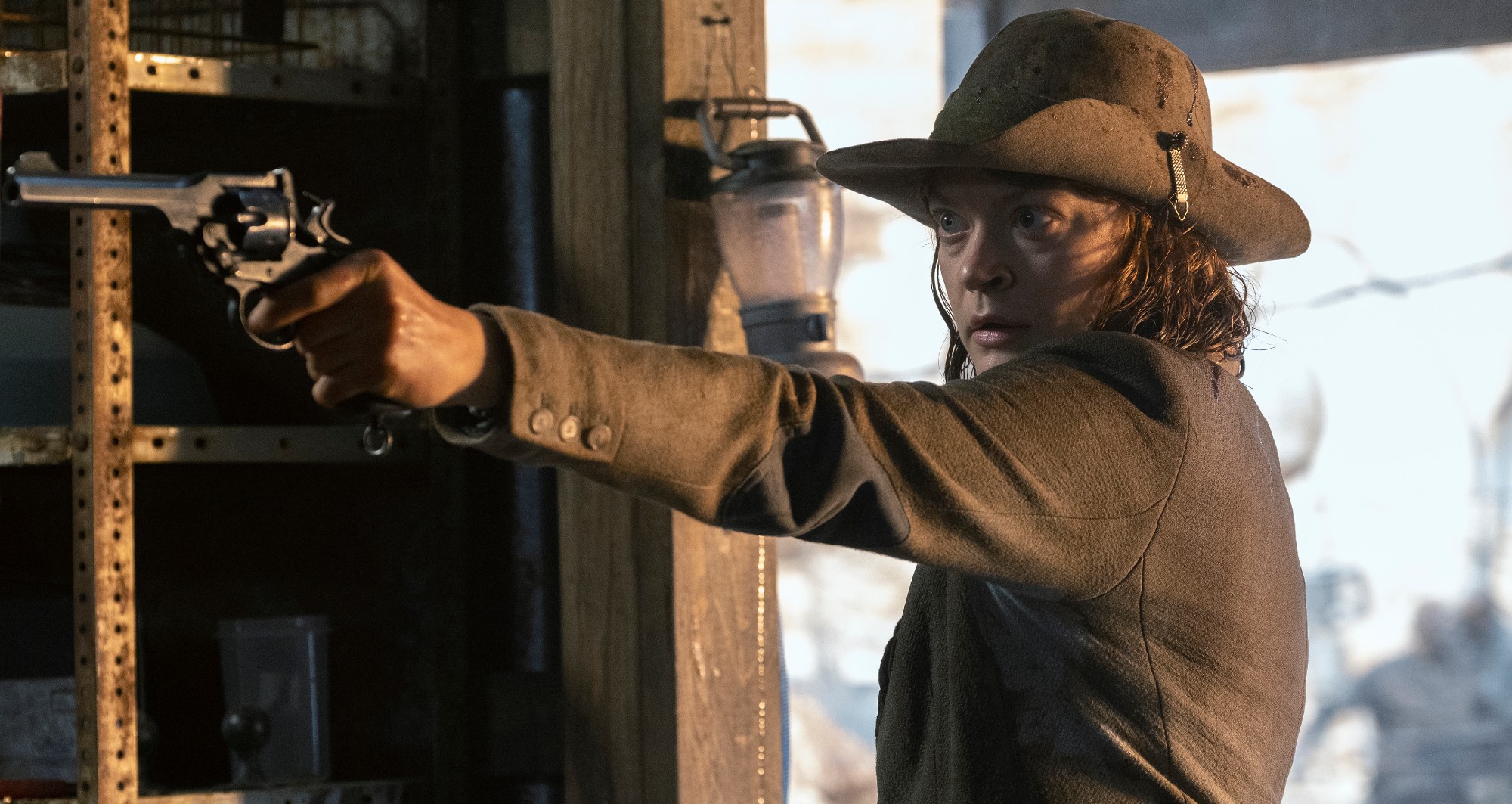 The twisting and turning second half of Fear the Walking Dead season 6 continues with “Things Left to Do,” which says goodbye to yet another main cast member, although few viewers will likely mourn her. Virginia, one of the series’ most uniquely deranged big bads, has breathed her final breath at the hands of June, whose husband, John Dorie, was murdered by Dakota (Virginia’s daughter, not sister) last week. Needless to say, “Things Left to Do” is the most consequential episode of the season thus far, and Virginia’s death will no doubt alter the trajectories of every person she touched and tormented.

But first thing’s first: Why did June pull that trigger and blow Virginia’s brains out?

In “Bury Her Next to Jasper’s Leg,” June exhibits a most gruesome form of mercy by electing to save Virginia’s life by amputating her zombie-bitten hand when they’re trapped together in the oil fields, all in exchange for Virginia’s approval to build a hospital for she and Sarah to operate and serve the community on their own terms. But when June finds her husband John’s zombified corpse washed up on a river bank a few episodes later, she understandably loses her patience with Virginia.

During a tense confrontation, June asks if she knows why Dakota would, as Morgan explained over the walkie, shoot her husband in the chest, but Ginny plays dumb. The Pioneer leader knows that Dakota murdered Cameron, which led to the framing and execution of Janis as well as to the death of John. And this time, June can smell Ginny’s lies from a mile away.

In the final moments of “Things Left to Do,” June finds herself alone with an ailing Ginny and points a gun to her head — the same gun that Dakota used to kill John. She’s come to the realization that she never should have let Ginny live. “You’re the reason. You always were,” June says as she pulls the trigger.

June also mentions that she “didn’t protect [her] daughter when she killed someone,” a reference to Rose, her daughter who turned and caused an outbreak at a FEMA camp when June couldn’t get medicine to her in time (which we learned back in season 4). When June sees that Virginia can’t hold her daughter accountable for her actions, she realizes the full scope of the mad colonialist’s deceit and desperation and ends her reign of terror.

Yes, Virginia’s story has come to an end, but the massive revelation that Dakota is her daughter sheds new light on why she had been acting with such animalistic desperation.

“She’s abominable. She’s utilitarian, a colonialist, has fascist tendencies,” Colby Minifie, who plays Virginia, tells Den of Geek. “But it’s the apocalypse. People behave in pretty abhorrent ways to survive. I’m not a fan of her as a person, but I do understand her. You have to go, why is she doing this? Where is she coming from? It’s a mother’s love for their child, or a father’s. It’s a huge theme that carries a lot of these characters through their arcs. When you play a ‘villain,’ you can’t think of that person as a villain. You have to be their lawyer and find reasons why they do all of the things that they do.”

The revelation that Virginia has been building Lawton to provide a normal life for her daughter makes her actions more understandable, though no less insidious. When Ginny finally confesses to her true connection to Dakota, it’s a moment that will no doubt define who Dakota becomes as a person moving forward.

“I’m so curious to see what happens to Dakota after the death of someone she hated and now knows is her mother,” Minifie says. “Ginny’s death and the other characters’ reactions to her death will propel them forward in a huge way.”

“Things Left to Do” closes with June seemingly adopting a new outlook on life, a devotion to seek bloody justice, a stark contrast to her previous commitment to help anyone in need, even those she doesn’t trust. The shot of her almost eclipsed by the blade of Morgan’s abandoned axe eludes to her internal shift.

As for Morgan, his decision to show Ginny mercy will no doubt earn him deep trust among his supporters and set the tone for his new settlement. He won’t lead the way Ginny did, but that doesn’t mean he won’t face the same challenges as a leader that she did. With Grace’s baby on the way, there’s tremendous pressure to build a safe, thriving community for his people.

“So much of the show is about the strength in vulnerability,” Minifie says. “That’s what I think is so great about Morgan — he’s so ready to move toward the scary thing, which is love. That’s a scary thing to do. Virginia leads with anger and threats and deception, and I think in that moment she realized that those things didn’t get her where she needed to be.”

Virginia may be gone, but the reverberations of her life and death are sure to leave a mark on the rest of the season. Dakota will have to process her mother’s death and the fact that Ginny’s work at Lawton, as diabolical as it was, was all done to protect her. She and June will no doubt collide at some point down the road, and the emotional complexity of that encounter should be off the charts.

June’s way forward is unsettlingly murky. Will she go rogue? Join Strand’s rangers? Will she eventually want to tear down what Morgan is building? It’s hard to say, but if anything is certain, it’s that she’s now set on a dark path.

Fear the Walking Dead airs on Sunday at 9 pm ET on AMC.