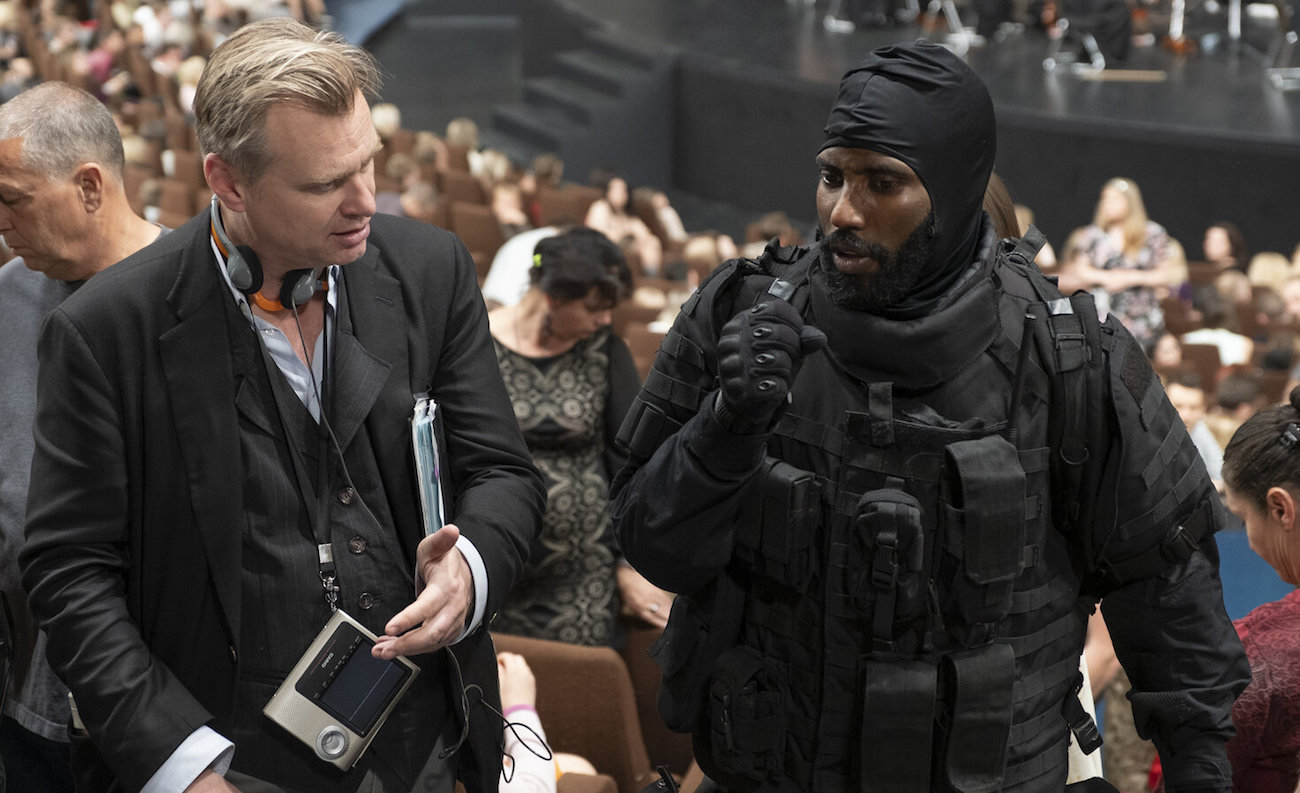 This article contains Tenet spoilers. You can read our spoiler-free review here.

Christopher Nolan has a reputation for making complicated, hard to understand movies, but in all honesty, that reputation is unearned. In Memento, the scenes filmed in color are running in reverse order, the scenes filmed in black and white are running forwards, and the film ends when they meet in the middle. Inception is a pretty straight forward heist once you get your head round the idea that the dreams are nested inside each other like Russian dolls, each running a little faster than the one inside of it. Even Tenet isn’t as complex as it’s made out to be. There are no branching timelines, just an awful lot of bootstrap paradoxes and loops.

However, while the film as a whole has a fairly easy to understand plot after a viewing or two, one part of the movie really lives up to Nolan’s reputation. The opening.

A lot happens, zero context is given for any of it, and most if it is never referred to in the film again. So what the hell was going on?

Let’s start by taking it step by step. Please pay attention, and remember the hand is quicker than the eye.

The film opens on a concert hall, and just as the musicians finish tuning up, a bunch of terrorists with machine guns come barging in shooting people and taking everyone hostage.

The police arrive on the scene.

However, there is another party of armed men—not the police or the terrorists—already there, waiting in a black van in SWAT uniforms.

One of the men in SWAT uniforms is John David Washington’s Peter Rotagonist—or the Protagonist for short. Pete is one of this team. As they see the police arrive, they slap on Velcro patches to match the incoming fuzz.

Then they burst out of the van, merging seamlessly with the incoming SWAT team as they storm the concert hall (which it turns out is an opera house because Nolan is too damn clever for his own good).

The police (the real police) pump sleeping gas into the vents of the concert hall, successfully knocking out all the hostages but, presciently, the terrorists understand the importance of wearing a mask at public gatherings.

At around this time we cut back to the box over the concert hall and a man who the script only refers to as “Well-Dressed Man,” even though he’s wearing a pretty non-descript suit to the opera. The person next to him, wearing a really much smarter looking military dress uniform, pulls a gun.

While this conversation is going on some of the Real Cops are coming down the corridor, shooting terrorists.

Who is “Them?” What’s the significance of “We live in a twilight world?” Who has the Well-Dressed made contact with? Shhh. Save your questions until the end, because right now we’re jumping out of this window to escape from the Real Cops.

But not before Pete can ask where “the package” is and be told “coat check,” and given a ticket.

We are three minutes and thirty-five seconds into the movie.

The Pete and Well-Dressed New Friend run and hide from the Real Cops among the audience, because if someone’s shooting at you there’s no better place to hide than a crowd of unconscious innocent by-standers. At the same time, the Real Cops come in and murder the last of the terrorists.

At this point the Pete notices the people in SWAT uniforms are planting bombs around the concert hall.

One of the Bomb Planting Cops tells Pete to grab a bomb from a dead cop’s bag. Pete stops to stare at the bomb for a few seconds, and then another cop sees him, thinks he’s sus, leading him to rip off Pete’s Velcro patch. Only then does Suspicious Cop gets shot by a Fake Cop who says, “No friends at dusk, huh?”

The bag contains a strange metal object that, if you’re watching this for the second time, you will immediately recognize as part of the Algorithm (a secret formula for inverting the flow of entropy on a global scale, bringing past and future crashing together and ending the universe as we know it). Then Pete hoofs it to the rally point to meet up with Well-Dressed Man and the rest of the Fake Cops.

Pete says the Ukrainians are expecting a passenger. This is a Ukrainian opera house, so presumably he’s talking about the cops. Is the Ukrainian government behind this? No time to discuss that because we’reswapping outfits!

Well-Dressed Man, who I guess now is just Regularly-Dressed Man, puts on a SWAT uniform while a Fake Cop puts on the suit, presumably meaning he is now the Well-Dressed Man, and I’m sorry I may be making this more complicated than it needs to be, but please give your characters actual names in the future, Chris.

Pete tells the Regularly Dressed, Formerly Known as the Well-Dressed Man that he’s “never seen an encapsulation like this,” referring to the bit of Algorithm. “Encapsulation” is a term that often refers to the storage of nuclear waste, so Pete clearly thinks he’s there to retrieve parts of a nuclear bomb.

RDFKATWDM says, “We don’t know how old it is, but it’s the real deal.”

Pete wants to know if RDFKATWDM has an out, he does, the sewer, so Pete tells him to take that route, because he doesn’t trust the one they had planned. Pete also asks if the bomb (the cop bombs, not the nuclear one) can be defused. It can’t, and there are more among the audience. So even though it isn’t his mission, Pete goes back to rescue all of the audience members who didn’t get killed by stray bullets when he was climbing over them earlier.

He collects all of the bombs in a big bag, but as he picks up the last one a Cop (we think a Fake Cop) pulls a gun on him.

Pete says, “Walk away, you don’t have to kill these people.”

We know this because of the script. Until that became available there was a lot of debate online about who said that, because that’s a risk when everyone is wearing masks and delivers their lines in the same low-key tone of voice.

Then a bullet shoots backwards out of a bullet hole, through the Fake Cop, killing him, and into the gun of someone standing behind him.

Even on first viewing, this was the moment that made the most sense in the entire scene for me.

Pete has time to see his savior jogging away with a distinctive orange tag hanging off his bag. This is because he has just been rescued by Neil, the posh, trashy Robert Pattinson-portrayed English agent who we later learn has a timey-wimey River Song-esque relationships with Pete.

Fake Cop in Well-Dressed Man’s Clothes notices this and points out he’s not part of the Fake Cop club, but Pete isn’t fussed.

They run out, lobbing the bombs up somewhere I hope nobody else was hiding, and they explode behind them.

Pete and Fake Cop in Well-Dressed Man’s Clothes get back to the van, and as soon as they open the door, someone in the van says in Russian, “That’s not the guy!” presumably referring to the Fake Cop Who is Not the Well-Dressed Man, and shoots him in the gun. Then they knock out Pete. On second thought, maybe these are the Ukrainians?

Pete wakes up tied to a chair between some train tracks where the driver of the Fake Cops van tells him a man can be trained to hold out for 18 hours, so Pete’s colleagues will by free by seven. He points to Pete’s colleague to boast he didn’t last 18 minutes and knew nothing. The torturer confiscates Pete’s suicide pill, and tells him the clock is fast and turns it back an hour. This is called “Foreshadowing.” There are also trains running backwards and forwards either side of the torture scene. This is also “Foreshadowing.”

There’s some nasty implied torture, but in a moment of opportunity, Pete lunges forward and swallows the suicide pill that Fake Cop in Well-Dressed Man’s Clothes was smuggling behind his back.

Pete wakes up in bed to discover it was a test, despite the fact they pulled his teeth out for real  and apparently it’s taken a lot of reconstructive surgery to put them back. Also despite it being a test, Pete’s team are all dead and the bit of algorithm is lost.

This all took eight minutes, and then we launch into the film proper.

What Was the Plan?

So questions. First, what was the actual plan here?

Near as we can tell, the once Well-Dressed Man works for the organization run by Kenneth Branagh’s Sator (the “Private Russians” mentioned during Pete’s post-death debriefing). Sator had the Well-Dresed Man infiltrating the Ukrainian government to make contact with someone (if you want to go down that rabbit hole of who, the mystery third party could be the Protagonist’s future, Tenet-running self).

The siege was executed by a senior Ukrainian military officer and apparently enough of the Ukrainian police force that Pete’s team didn’t know which unit would respond to the terrorist attack. The police also very clearly shoot a lot of the terrorists dead. So on discovering the Well-Dressed Man is a mole, the Ukrainian government decide to vanish him and either get a hold of or retrieve the piece of Algorithm in his possession.

The corrupt personnel decide the best thing to do is take him to the opera with one of their senior military officials. They then pay some mercenaries to act as terrorists and take the audience of the concert hostage. Some of the civilians, or the terrorists, must have informed the police, so that a SWAT team made up of what must be real police turn up.

The police gas the concert hall, and a team of real cops go up to the box where Well-Dressed Man is. Along the way they shoot some of the mercenaries they share an employer with.

Sator’s team knows about this, and have their own fake SWAT team ready, not knowing that their fake SWAT team has also been infiltrated by Pete and his CIA friends. Sator’s team plans to extract the well-dressed man and steal the bit of Algorithm, then plant a bunch of bombs in the concert hall the blow it up and destroy any evidence.

They kidnap Pete, torture him, and when he takes a pill and drops unconscious, they think “Well, we’ll leave this body somewhere it can be easily retrieved by his colleagues” and call it a day.

The torturers are on Tenet’s payroll, and Future Pete has instructed them to go back, kidnap and torture him, then let him commit fake suicide so he can be recruited. This plan means Pete gives the order to have his own teeth ripped out, which you have to admit is pretty hardcore.

Meanwhile Pete’s friends, the Algorithm piece, and the Well-Dressed Man all run into some more of Sator’s team as they escape through the sewer, and are killed.

Having watched the same eight minutes of film over more times than I care to count, this scenario is the best explanation I can come up with. Feel free to offer your own theory in the comments.