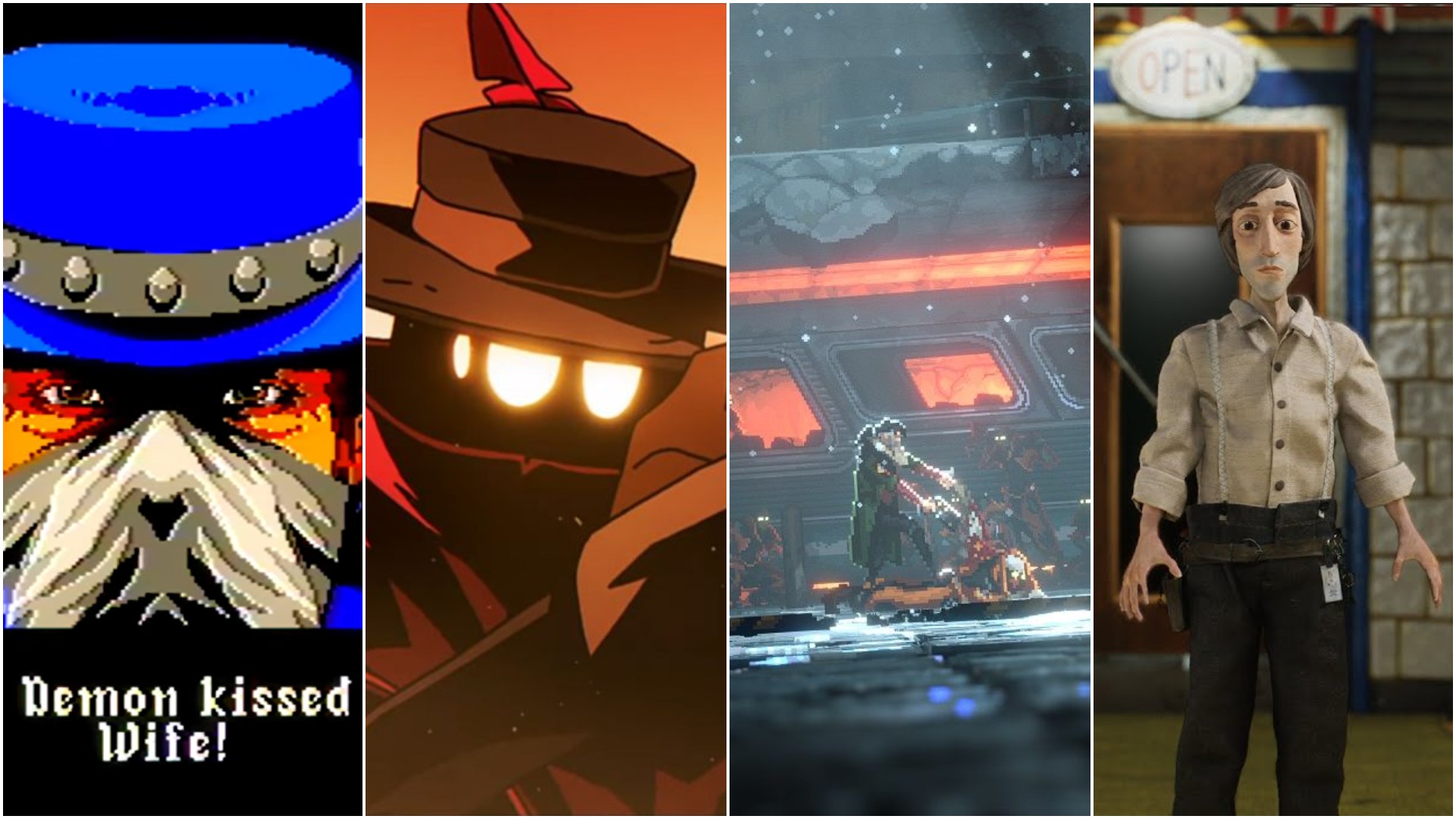 Despite being a somewhat quiet year for the show, E3 2021 was filled with so many new titles and updates to previously announced major projects that it’s hardly a surprise that many smaller games featured during the show ultimately went overlooked and ended up being somewhat underrated.

Yet, this is so much more than a list of games that let us celebrate little studios and individual developers. At a time when Covid-19 production delays threaten to push so many major games into 2022 and beyond, these 15 titles (and so many more) could end up working their way into upcoming game of the year conversations just as they remind us that new ideas aren’t dead: they’ve just gone indie.

From wizards with guns and spiritual Thief sequels to cosmic horror punk RPGs and escape room deck builders, these are the 15 underrated E3 2021 games that not enough people are talking about.

You’re going to see a number of Devolver Digital games on this list, but few E3 titles from any publisher or developer made as good of a first impression as developer Galvanic Games’ Wizard With a Gun.

Described as an “online cooperative sandbox survival game,” Wizard With a Gun looks like a blend of Don’t Starve and Enter the Gungeon. Aside from the incredible name, the thing that stands out most about this game is the ability to combine magic and guns to craft some truly wild weapons. Interestingly, it may actually be possible to push your experiments too far and craft something that will hurt you more than your enemies.

I’m a huge fan of developer New Blood Interactive (probably best known for 2018 horror shooter DUSK), and Gloomwood could just be their best game yet.

Gloomwood is a stealth survival horror game that, in many ways, effectively serves as the Thief sequel fans have been begging for. The game’s Steam demo showcases its tremendous potential, but the title’s E3 2021 extended gameplay preview suggests that the best is yet to come.

There’s a good chance that you actually saw this game considering that it was featured fairly prominently during Xbox’s E3 2021 show, but it’s pretty much impossible to give this project enough love.

While most people are (understandably) focusing on Replaced’s wonderful pixel art visuals, the few glimpses of action gameplay that we see in the title’s debut trailer suggest that this is going to be so much more than an artist showcase.

Bear and Breakfast was actually quietly revealed last year, but I’m more than happy to use its brief E3 2021 appearance as an excuse to hype up this wonderfully wholesome game with a potentially dark twist.

Bear and Breakfast presents itself as a kind of sim/builder game starring colorful and friendly woodland creatures, but both trailers we’ve seen so far suggest that there’s something darker at play that only reveals itself as you expand your cabin empire and dive deeper into the forest.

Somewhere between a Wallace and Gromit cartoon and a Wes Anderson movie lies the weird and wonderful Harold Halibut.

This stunningly beautiful project may just win you over with its stop motion visuals alone (which were handcrafted in real life and digitally scanned into the game), but it’s Harold Halibut’s classic adventure gameplay that could prove to be its best feature.

Lake is another one of those games that we actually heard about before E3 2021, but this is one of those projects that just keeps looking better every time we see it.

If you can get past its Hallmark movie premise (a young woman leaves her big city job to return to her small town home and deliver mail), you’ll find that Lake’s large world, branching storylines, and diverse cast of characters may just make it one of the most compelling narrative experiences on the horizon.

The most logical reason more people weren’t talking about The Anacrusis after Xbox’s E3 2021 show is that the multiplayer co-op FPS was arguably upstaged by two bigger, somewhat similar titles: Back 4 Blood and Redfall.

Were it not for those titles, I suspect that more people would have instantly fallen for this ‘70s sci-fi-inspired shooter with roguelike and dungeon master elements. The Anacrusis promises to offer hours of replayability, which should make it a perfect addition to the Game Pass library.

I understand if your brain is wired to ignore the mention of another roguelike dungeon crawler, but Loot River has already found some ways to distinguish itself from some considerable competition.

The highlight of this game so far is undoubtedly its level manipulation mechanics which add a compelling puzzle element to what may otherwise be a more standard entry into the genre. Having said that, even as a standard genre entry, Loot River looks like a lot of fun.

Atomic Heart is another one of those games that weirdly almost suffered from its prominent place in the Xbox E3 2021 showcase as it was flanked by larger titles that garnered most of the attention.

However, nearly every aspect of this game we’ve seen so far is, at the very least, compelling. Atomic Heart’s physics and power-based shooter gameplay looks like a blast, but it’s the game’s alternate 1950s Soviet Union setting and Fallout vibes it gives off that really has us intrigued.

Speaking of Fallout, you probably think that The Outer Worlds 2 and Fallout 76 are the E3 2021 games that will come closest to offering a proper new Fallout experience. However, Death Trash may just be the game that realizes the potential of so many of the little things that make that franchise great.

This cosmic horror punk rock action RPG so perfectly captures the spirit of classic games like the original Fallout titles and Shadowrun that it’s hard to look at it and not wonder how it was possibly assembled by a single developer. This labor of love should absolutely be on your wishlist.

There just aren’t enough martial arts video games in the world. I’ll never understand why that’s the case, but it’s just one of those sad facts of life.

While Sifu impressed us when it debuted during a PlayStation broadcast earlier this year, the game’s E3 2021 gameplay trailer ensured it will stay on our radars. Sifu’s intense melee fights and environmental interactions could just make it the go-to experience for starved martial arts fans everywhere.

Recent years have gifted us with a number of notable retro action games, and Demon Throttle looks more than ready to join the ranks of exceptional experiences like Shovel Knight and The Messenger.

This top-down co-op shooter is currently garnering attention for its physical-only release strategy, but it’s the game’s chaotic action and outlandish humor that will really make you want to add it to your shelf.

The deck builder genre has offered some of the most quietly compelling video game experiences in recent years, but I’m honestly not sure if I’ve ever seen a deck builder as intriguing as Inscryption.

The creator of 2016’s bizarre and wonderful Pony Island brings us this strange little game that combines elements of the deckbuilding genre with escape rooms and psychological horror. I can’t imagine how all of those incredible flavors are going to be mixed together into something cohesive, which honestly makes me that much more excited to see what this game is all about.

If Ghost of Tsushima didn’t quite give you a full dose of your Kurosawa-inspired video game fix, then you have to check out what Trek to Yomi promises to offer.

Trek to Yomi’s black-and-white visuals and samurai setting are obviously welcome Kurosawa callbacks, but it’s the way the gameplay references everything from Limbo and Mark of the Ninja to Bushido Blade that instantly shot this one near the top of our shortlist of underrated E3 2021 games more people should be talking about.

With Her Story, Telling Lies, and Silent Hill: Shattered Memories, Sam Barlow has firmly established himself as one of the most exciting and daring writers in gaming. Now, Barlow returns with E3 2021’s most underrated and overlooked game, Immortality.

Granted, we don’t know much about Immortality, but between the intriguing (if vague) premise that sees you explore three lost films starring a now missing actress and Barlowe’s outstanding track record, there’s no world in which fans of story-driven games won’t want to keep a close eye on this one.