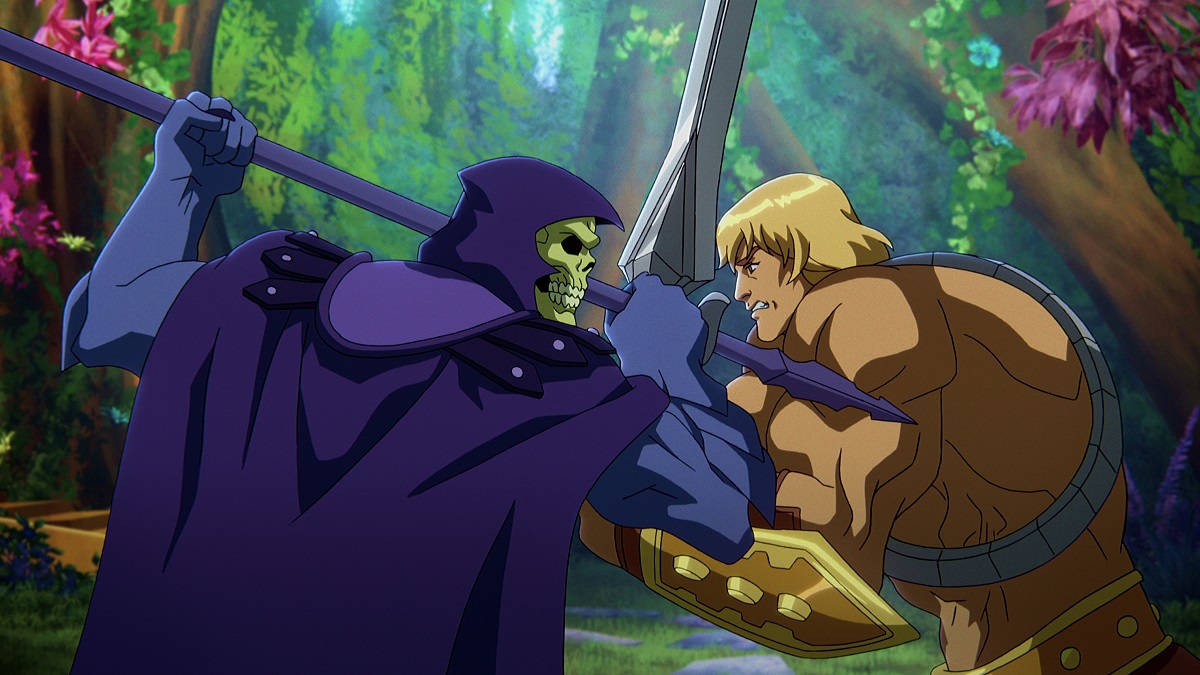 For a brand as beloved as Masters of the Universe, the franchise sure seems to have fallen on tough times lately. He-Man himself hasn’t had an animated series of his own since an excellent 2002 reboot stalled after two seasons. There have been endless attempts to get a new live-action movie out of the gate over the last decade or more. And ol’ Prince Adam has been upstaged by his twin sister Adora, recently the subject of Netflix’s excellent She-Ra and the Princesses of Power, arguably the best adaptation of elements of the MoTU world to ever hit the screen.

She-Ra prided itself on subverting expectations, from the character designs and animation style to its studied unwillingness to ride on He-Man’s coattails and its wonderful commitment to representation and diversity. Netflix’s Masters of the Universe: Revelation, on the other hand, has the stated purpose of being a direct sequel to the original animated series, Filmation’s He-Man and the Masters of the Universe, and both that mission statement and the faithful character designs make it clear this new series has old school fans in mind.

It’s all coming from a place of love for the franchise and expertise in its complicated history. Series creator and executive producer Kevin Smith recently told Den of Geek about his own experiences with the world of He-Man and the MoTU franchise growing up.

“When I was watching [the original series] I was about 11 or 12 years old,” Smith recalls. “I’d been a massive Star Wars fan… [but] my interactivity with Masters of the Universe wasn’t the toys as much as it was the cartoon, which I watched literally every episode of. I was born in 1970, He-Man and the Masters of the Universe was on in the early ’80s. We barely had cable TV. So you didn’t have a plethora of choices. After school I’d come home and this was on and maybe I was a little bit older than I should have been for enjoying that show, but I loved animation. It didn’t matter. I still watched Saturday morning cartoons at that age. I still watched Super Friends. So for me it wasn’t off-brand to be sitting there and enjoying this cartoon.”

Of course, that old Filmation series was aimed at the youngest of viewers, and it hasn’t aged particularly well even when viewed with the most nostalgic of eyes. Which makes the fact that Masters of the Universe: Revelation is so great a remarkable achievement.

Masters of the Universe: Revelation picks up shortly after (it’s never specified) the conclusion of that original cartoon series. Of course, continuity (or logic) were never much of a concern there, so if you know the basics of the He-Man legend (planet Eternia, magic and high technology coexist, Prince Adam is secretly He-Man, evil Skeletor with cool looking henchmen, etc) you know everything you need to know from the first moment.

But while this may indeed be a sequel to that original series, it’s more of a spiritual sequel to the entirety of MoTU lore, something evident from the opening credits, which pay tribute not to the old cartoon but rather the lush painted artwork that adorned classic Masters of the Universe toy packaging. Sure, every character you would expect from the old show is here (plus some surprises) but so are countless other characters from the toys, vehicles, structures…and deep cuts you might never expect.

Interestingly, Smith didn’t have much experience with the toys themselves.

“It was just weird to not be able to interact with [the franchise] like everybody else [as a child], because it was made to sell toys,” he says. “And that was the one effect that it wasn’t going to have on me, based on my finances. We were not a rich family by any stretch of the imagination. So to be able to, years later, grow up and then ‘play with the toys’ so to speak, making this show felt super special. In a world where I didn’t get to play with them as a kid, it was worth it to wait for this long.”

While primarily known as an indie film director with a penchant for comedy, Smith has a history of blending the best elements of complicated mythologies together when he plays in other sandboxes, nodding to different elements of continuity, dropping obscure Easter eggs for serious fans, while telling easily accessible stories. His comic book runs on Daredevil and Green Arrow helped redefine those characters and position them for the A-list status they later achieved, and his infamous but better-than-you’ve-heard, unfilmed Superman Lives screenplay from the late 1990s hinted at elements of a wider DC Universe, long before that sort of thing was fashionable.

With such touchpoints in mind, Masters of the Universe: Revelation feels like Smith’s ultimate fan achievement: paying tribute to a complicated and bizarre mythology in a way that still feels welcoming to new audiences. In fact, it was those Daredevil and Green Arrow runs that Smith says brought him to the attention of Mattel’s Vice President of Content/Creative, Rob David. Smith recalls that David told him they were hoping to make something “for all the fans who grew up with it, who the show meant something to, who know every detail about it.”

For a lifelong fan like Smith, paying tribute to the original series was an “intriguing” prospect, more so than doing a complete reinvention like Netflix had done with She-Ra. This led him to conversations with another lifelong He-Man fan, Netflix’s Director of Original Programming, Ted Biaselli.

Smith describes Biaselli as “the secret sauce in all of this.” It was Biaselli who insisted that the characters and concepts be taken seriously. “Treat it like Shakespeare,” Smith recalls being told.

While that may sound ambitious, or even ridiculous when we’re talking about a franchise with characters named Battle Cat, Roboto, and Mer-Man, Masters of the Universe: Revelation really goes for it, and has a voice cast that’s up to the task. The beats and pacing of the story, were these six episodes perhaps toned down for live-action, would feel perfectly at home with the pacing of a prestige cable drama. Chris Wood and Sarah Michelle Gellar are both wonderful as He-Man/Prince Adam and Teela, and Mark Hamill as Skeletor is one of those castings that it’s hard to believe nobody thought of sooner. But when they’re joined by the likes of two perfectly cast Game of Thrones veterans (Liam Cunningham as Man-at-Arms and an almost impossibly good Lena Headey as Evil-Lyn) you’re in for an even bigger treat. Keep an ear out for Henry Rollins, too.

To call Masters of the Universe: Revelation a “sequel to the original series” is in fact something of a disservice. The best way to describe it is a series that blends all of the disparate elements of the He-Man legend from the toys to the comics to the cartoons, takes them as seriously as one can possibly take them without resorting to adolescent grimdark pretensions (hmmm…Grimdark sounds like a perfect MoTU villain now that I think about it), and tells a serialized story that is both a perfect introduction for new fans and feels like the show has “grown up” with its original audience.

That’s something of a revelation in itself.

We’ll have more from Kevin Smith about Masters of the Universe: Revelation in the coming days!